It has been half a year since my last post; unsurprisingly, a lot has happened since mid-year.

Soon-to-be Doctor, Ryan Tisdale, has gone on a publishing spree with three chapters out this year alone:

And equally important is that Ryan’s dissertation is currently under review at Utrecht University in The Netherlands. An immensely productive year for Ryan, capped by a well-earned vacation! 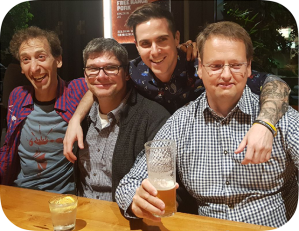 Closer to home, I had the good fortune to organize a symposium for the International Congress of Neuroethology in Brisbane. Contributing to The Evolution of Sleep and Adaptive Sleeplessness Symposium was Barrett Klein (left) from the University of Wisconsin, La Crosse (USA), me, Mike Kelly (third from left) from The University of Western Australia, Perth, and Niels Rattenborg (right) from the Max Planck Institute for Ornithology, Seewiesen (Germany). After the meeting, we were fortunate to host Barrett back at La Trobe, where he gave two outstanding seminars and met up with the rest of the lab.

More recently, I chaired the Wild Sleep Symposium at the Wild Clocks 2018 meeting, superbly organized by Michaela Hau and Bart Kempenaers at the Max Planck Institute for Ornithology in Seewiesen, Germany. There, we heard from Paul Manger from the University of the Witwatersrand (South Africa), David Samson from the University of Toronto (Canada), Anne Aulsebrook at nearby University of Melbourne, and Erica Stuber at Yale University (USA), and me. One of the best meetings I’ve attended and one that reunited old friends and opened new opportunities. A big thank you to Ela and Bart!

Lastly, I’ve taken a stab at writing for popular media. Annie and I teamed up for a piece at The Conversation answering sleepy questions from a very much awake 5-year-old named Lucinda in Canberra. She cleverly asked, Do animals sleep like people? Do snails sleep in their shells? Why doesn’t a whale drown when it sleeps? Great questions, Lucinda! You can read our responses here. I then tried outreach to somewhat older kids in the UK magazine, Science + Nature with The Science of Snooze.

On behalf of the Sleep Ecophysiology Group, have a lovely and safe Christmas and New Years, and a productive 2019!